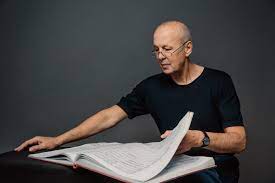 The Austrian-Hungarian conductor collapsed and died in Munich on Friday night during a performance of Die schweigsame frau.

Anna Tomova-Sintow
I’m deeply grieved by the sad news of the loss of Stefan Soltesz. Artistically connected to him since very young years, when he was still assistant to Karl Böhm and Mr. von Karajan, I later experienced many joint performances with him as a conductor, especially in works by Richard Strauss. I remember him as a unique musician and quite a master at the desk! With pain in my heart – my deepest condolences to his family too!

Director Barrie Kosky:
I am deeply saddened by the sudden death of my friend and artistic partner Stefan Soltész. During the 10 years of my tenure, Stefan conducted numerous wonderful and exciting performances at the Komische Opera Berlin.
Whether Schreker, Offenbach, Kalmán, Mozart, Johann or Richard Strauss – Stefan always approached various repertoire with cleverness, musicality and a unique theater instinct.
He loved singers, he loved the art form opera and he expanded the boundaries of musical theatre.
I am fortunate to have brought four productions on stage with him at the Aalto Theater in Essen during his remarkable tenure. Our production of “Tristan und Isolde” is to this day one of my most beautiful theater experiences.
But Stefan was not only a great musician, but also a person with a sense of humor and biting humor.
I will not only miss him as a passionate conductor, but also his infectious, lethargic laughter.
Rest in peace my friend We will miss you.

Conductor Sascha Goetzel
It is with deep sadness that I learn that dear collegue and friend Stefan Soltesz, one of the last true Masters of the “German- Fach” passed away…. last night in Munich.

Andreas Schager
A great conductor leaves the stage! I still remember our Rienzi at the Rome Opera and the Egyptian Helena at the Frankfurt Opera. Soltesz was a great conductor, especially for the two “Richards”, i.e. Wagner and Strauss. If something went against his musical intentions, he could get loud, but he was always committed to the best possible quality.
Rest in peace! My sincere condolences to his wife Michaela Selinger.

Samuel Ramey
He played for me when I auditioned for von Karajan in Salzburg.

The Vienna Boys Choir
We mourn Stefan Soltész: He was already a legend as a boy singer when he jumped in for the seasick Kapellmeister on a crossing to New York. We had the pleasure of singing the three boys in the “magic flute” several times under his baton at the Vienna State Opera.

Mara Zampieri
Dear Stefan, I never expected to read what happened last night.
Like Bepi Sinopoli, Giuseppe Patane’ and Marcello Viotti you left this world dying on the podium.
Thanks to you, your enthusiasm, your mental openness, I was able to debut Salome in Germany, for me you were even after “my Master for Salome”.
So much music together with Norma, Manon Lescaut, Trovatore and many others, we looked alike because of non-conformity and originality always joined by the constant desire to deepen, unforgettable our laughter, you with those witty eyes with the lightness and sympathy of few.
I want to remember you this way my friend, even though this news upsets me deeply.

Cellist Johannes Krebs:
I remember many opera performances and concerts in Hamburg and Bremen. In my first year at the State Opera in Hamburg, he came to the orchestra pit an hour before the start of the performance, where I practiced diligently. He gave a stern look at the new guy and asked “do you know this opera?? “. Of course I was playing it (I think it was Falstaff) for the first time and he knew it. I told him that I had been playing it for 30 years, but I couldn’t speak for my colleagues. The answer greatly pleased him.

Mariana Zvetkova
R.I.P. Maestro Soltesz!
One of the greatest conductors I worked with! A month ago I was very happy to see him conducting “Parsifal” at Sofia National Opera, and our conversation brought great memories from our work together in Bruxelles and in Aalto Theater in Essen.

« Artistic director, 37, is killed in US car crash

Just in: Diva divorces her manager »