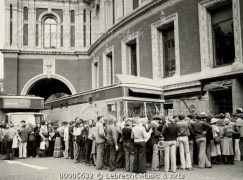 From my monthly Lebrecht essay in The Critic magazine:

This summer’s BBC Proms will be the last festival of British orchestras as we know them. This is not due to Brexit, Covid, Ukraine, inflation, the gas squeeze or any other headline. It is the consequence of half a century of mismanagement and mental indolence on the part of safe-seat executive suits who turned a Nelsonian blind eye to the gathering storm. Well, it’s all over now.

The death sentence was delivered by the BBC’s director general, Tim Davie, in a statement terminating BBC Four, which televises most of the Proms, and urging the BBC’s six orchestras in London, Manchester, Scotland and Wales to look for “alternative sources of income where possible.” The insincerity of that suggestion is on a par with Vladimir Putin’s “special measures” in Ukraine.

There is no “where possible” — as Davie, a former boss of BBC music and radio, is well aware. Private cash for concerts is scarce and BBC orchestras have no brand to sell apart from the big one — the GazProm Last Night of the Proms. Davie knows what lies ahead for his orchestras: oblivion. All he can do is soften the pill and spread the blame. The party’s over.

No-one can say they did not see this coming…

Read on here… and reflect on the loss.

« Three drop out of BBC Prom

Schotts gets shot of London boss »