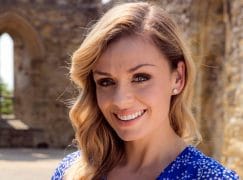 The most successful classical artist of the 21st century?

The Welsh singer Katherine Jenkins is living the dream.

In her newest c.v. reprinted yesterday by the Times magazine, Jenkins claims sales of ‘more than 2.6 million copies’  of 14 albums and purports to be ‘the most successful classical artist of the 21st century.’

Can that be true?

Describing herself as a ‘classical’ singer is slightly far-fetched: she performs popular TV themes, movie hits, church hymns, opera arias and anything else the crowd might fancy.

As for ‘success’, André Rieu has sold more albums and concert tickets than any living classical artist.

Andrea Bocelli has multiple millions on his sales chart.

Lang Lang is famous in China, Jenkins only in the UK.

Cecilia Bartoli has sold more arias than any opera singer on record since Maria Callas.

Jonas Kaufmann is the hottest ticket in opera.

So how does Jenkins get away with it ?

Just in: Black orchestral musicians get organised in the US »