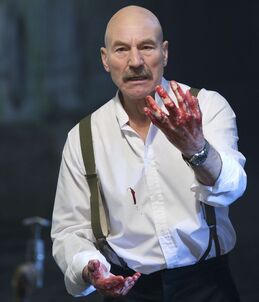 As a theatre critic who spent 30 years going to the theatre at least 4 times a week, I have seen hundreds of Shakespeare productions, too many to count. In this long career, I’ve seen every great actor of my lifetime at their best – Gielgud, Scofield, Olivier, Redgrave, Robeson, and their female equivalents – and I decided, several years ago, to call a halt, not to Shakespeare as a whole but to those plays which are these days mostly performed to give our great, and not so great, actors the opportunity to measure themselves against the major roles. I reckoned they could do it without me. I had no need in my life to see another Hamlet, Macbeth , Cleopatra or Lear.

Then I was nagged by knowlegeable friends to see Patrick Stewart in Rupert Goold’s  radical rethinking of Macbeth. and it was a revelation. I thought I knew the play. Under duress, I could probably recite it for you, but my understanding of Macbeth was nothing like this. This production caused me to re-examine everything I thought I knew and see the play as if for the first time.

I’m delighted it’s now on film and I can share it with you.  Kate Fleetwood as Lady Macbeth and Patrick Stewart in the title role were both nominated for Tony awards for their New York stage performance but the real reward is a fresh look at this amazing play, Shakespeare’s shortest, relocated to a nameless 20th-century netherworld in this terrifying adaptation. It all goes to show I should never have pre-judged what I was going to see. If I’d stuck to my ridiculous prejudice, I should never have seen this Macbeth.

On the other hand, you have to kiss a lot of frogs……