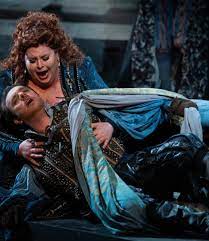 Opera of the Week: An all-star Verdi Ernani

In 1844, 14 years after Victor Hugo presented Hernani, Giuseppe Verdi adapted the play into an opera for La Fenice, Venice. Ernani was an immediate success, marking Verdi’s prowess at adapting an historical event (the crowning of Charles V as emperor at Aachen Cathedral) to a psychologically convincing musical drama. The backdrop of three men paying court to one woman was the perfect foil for Verdi to explore the expressive qualities of three types of male voice. The tenor, a youthful suffering lover – Ernani. The bass, an elderly ruthless egotist – de Silva. The baritone, a more complex figure torn between tenderness and violence, self-indulgence and idealism – Don Carlo. As luxuriant as the sumptuous costumes of director and set and costume designer Hugo de Anna’s period production, Teatro dell’Opera di Roma’s cast stars Angela Meade as Elvira, Francesco Meli as Ernani, Evgeny Stavinsky as Don Ruy Gomez De Silva and Ludovic Tézier as Don Carlohttps://youtu.be/Ol18PZTs_QQ.  The Teatro dell’Opera di Roma Orchestra  is conducted by Marco Armiliato.
.

The Plot:  Ernani is a love story about a young woman, Elvira, caught between three men: her lover, the nobleman-turned-outlaw Ernani; her guardian, the rich, elderly de Silva, who wants her for himself; and Don Carlo, the King of Spain who also has his eye on Elvira. Given the number of protagonists, it is also the story of a tragedy.

« Minnesota gets another Nordic music director