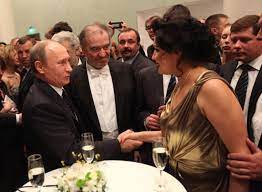 The Russian soprano’s comeback has hit a major setback.

While Italian opera houses – Verona, La Scala – have reopened their doors, the rest of Europe has waited to decide whether the former Putin endorser is now fit to perform.

Travelling on an Austrian passport, she has a raft of bookings ahead in Germany.

Last night, however, Stuttgart told Netrebko she is unwanted.

Netrebko was due to give an openair recital there on September 3.

But the venue is owned by the state of Baden-Württemberg. Its Finance Ministry has stated unequivocally that it could not tolerate Anna Netrebko performing there while the war in Ukraine was still raging.