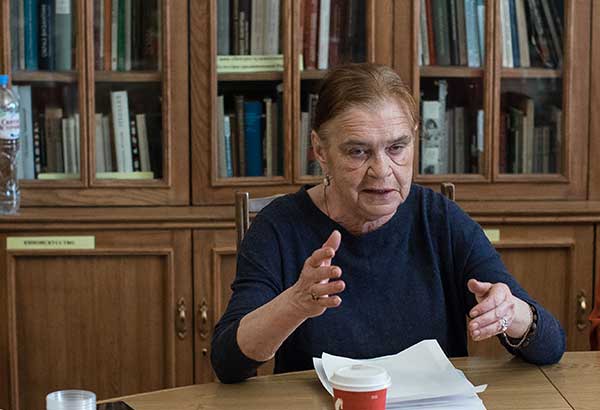 A Rimsky expert dies in Russia

Here’s her official c.v.:
Doctor of Art Criticism, leading researcher at the State Institute for Art Studies (since 1987). From 1997 to 2009 scientific secretary of the Glinka State Central Museum of Musical Culture. The main areas of research interests are related to Russian music (church, classical and 20th Century, including the musical culture of Russian emigration). The author of the mono­graph “N. A. Rimsky-Korsakov. The Attempt of Present-Day Reflection” (1995); author of chapters in the “History of Russian Music in 10 volu­mes” (State Institute for Art Studies) and chapters on music in the “Russian Artistic Culture of the Second Half of the 19th Century” (ed. by G. Yu. Sternin), chapters in the multi-authored monograph “Rus­sian Music and the 20th Century” (1997, ed. by M. G. Aranovsky). Scientific editor of the first edition of the authentic text of S. Prokofiev’s music for the film “Ivan the Terrible” (1997, “Hans Sikorski,” Hamburg), and of the first complete commented editions of Rimsky-Korsakov’s and Kalinnikov’s sacred music (“Musica Russica,” USA). Project executive of the multivolume edition “Russian Sacred Music in Documents and Materials” (since 1998, six volumes in eight books have been published). Scientific editor (as well as author of articles and publications) of collections of documents of Russian musicians, including Glinka, Rimsky-Korsakov, Rachmaninov, Taneev, Prokofiev.