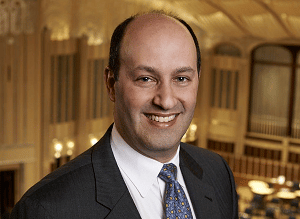 What next for the New York Philharmonic?

Deborah Borda will be an impossible act to follow.

Her impending departure is a major headache for New York’s musical planners.

Effective as her successor Gary Ginstling (pictured) has been at the National Symphony Orchestra, that’s a c.v. in DC where classical music comes somewhere around the level of street furniture in the battle for public attention. This is New York City, where the Philharmonic still counts for something – not least thanks to Borda’s efforts in her two spells as CEO.

Ginstling, before Washington, was CEO of the Indianapolis Symphony Orchestra. Before that, he was press flak in San Francisco. He will have to hit the Manhattan ground running – and fast.

Borda has left in place a brilliant new hall and much improved labour relations.

The big question is who comes in as music director. Ginstling has worked well in DC with the Italian Giandrea Noseda, who would now join a list of candidates that consists of a couple of Finns, no notable women or minorities and a longterm ban on Russians.

Borda’s close relationships with Gustavo Dudamel and Esa-Pekka Salonen will count for nothing in the new state of affairs. Nor is Berlin’s brilliant Kirill Petrenko likely to be tempted by a big Wall Street check.

The race is on for the New York podium and there are no front-runners.