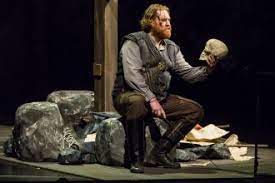 What does the Queen have to decide?

Today is the last of our opera selections from OperaVision streamed to celebrate Queen Elizabeth II’s Jubilee.  Not everything is easy for a queen.  In this extract from the three act opera Bánk bán  by Hungarian composer Ferenc Erkel, the hero, Bánk bán, sings ‘Magyar hazámnak téreit bejártam’  with the Hungarian State Opera.

What is it all about?   Viceroy Bánk (Levente Molnár) has sent several reports to Queen Gertrud (Ildikó Komlósi) about Hungary’s misfortunes, but they have fallen on deaf ears. Bánk confronts the Queen directly in the throne-room, and she condemns him to death for his insolence. Her call for help is answered by Ottó (Péter Balczó), her brother who raped Bánk’s wife. In the ensuing fray, the Queen pulls out a dagger on Bánk but he overpowers her and crushes her beneath the throne.

A grisly tale but as Elizabeth II has limited constitutional power and serves only as a symbolic figure in  in the British government she does not have to worry about such a dramatic fate.  And it is also the reason for her huge popularity, both her longevity and also that she refrains from commenting in public on the work of her ministers.  We all wonder what she really thinks about the fourteen prime ministers she has listened to in her 70-year-reign.