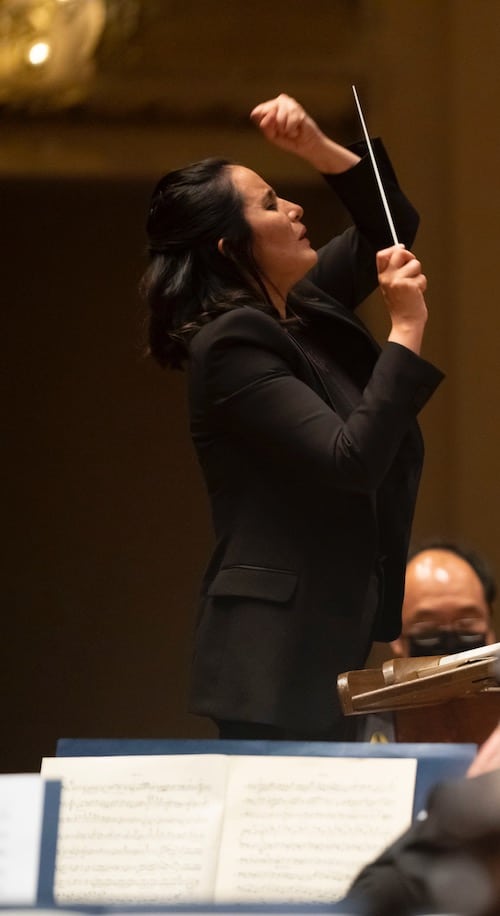 …This is the second time in ten weeks that Muti has been sidelined by Covid, after the 80-year-old conductor had to pull out of a program in April. On that occasion, Lina González-Granados handled part of a revised program, and Thursday night she took over podium duties for the entire concert and the show went on.

Now in the final month of her tenure as the CSO’s Solti conducting apprentice, González-Granados handled the last-minute assignment with energy and aplomb. With Muti having prepared the program and led all but the last rehearsal, the performances were already largely baked. But give credit to the young conductor for stepping into a difficult situation and directing the orchestra effectively in the evening’s two epic German cornerstones.

Even with the Covid/podium side-drama, the evening belonged to Anne-Sophie Mutter….

Wynne Delacoma in the Chicago Sun-Times:

The soaring, romantic melodies of Brahms’s Symphony No. 1 were an ideal showcase for Gonzalez-Granados’s ability to sculpt rich, heartfelt orchestral sound. She had no chance to rehearse the CSO herself, and balances were sometimes off. Brasses were occasionally too loud, and in the opening pages, the surging unison strings lacked a distinctive profile.

But the mood was serenely relaxed as solo winds rose and fell in lyrical song in the first movement. Brahms’s expressive melodies seemed to glow as CSO principal players — notably Stefan Ragnar Hoskuldsson, oboe William Welter and clarinet Stephen Williamson — passed musical phrases among themselves. The more light-hearted third movement was both buoyant and hefty, with motifs tumbling energetically from one set of orchestral voices to the next. In contrast, the final movement was full of majesty and excitement, prompting the audience into prolonged cheers….

A message from Yoko Ono »