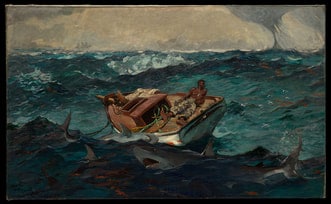 The Gulf Stream and the Atlantic World – Met Museum of Art

​When I was in New York recently I spent a fascinating day at Winslow Homer:Crosscurrents, the monumental exhibition of paintings by an American painter whose work I knew only slightly. Now the Met is offering a free lecture on one of Homer’s most recognisable paintings and its wider implications, by a number of significant scholars.

Join these scholars and artists for a discussion of Winslow Homer’s  most famous painting – The Gulf Stream – and its intersecting themes of race, politics, and environment in the context of the Atlantic world.

These experts include Ada Ferrer, Julius Silver Professor of History and Latin American History, New York University, Bernard Ferguson, poet and essayist, Hugh Hayden, artist, Stephanie Herdrich, Associate Curator of American Painting and Sculpture, The American Wing, The Met and Sylvia Yount, Lawrence A. Fleischman Curator in Charge, The American Wing, The Met
This programme is pre-recorded and can be viewed on  YouTube from June 22 at 6pm ET