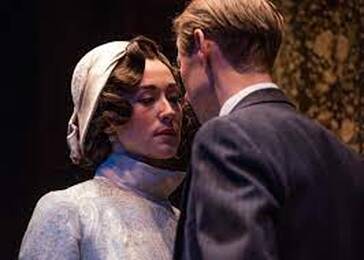 New York’s Mint Theater specialises in finding long-forgotten plays from the early 20th century and breathing life into them. Often, as here, they find one whose historical context is as resonant today as it was when it premiered in 1925.

Conflict is a love story set against the backdrop of a hotly contested election. The playwright, Miles Malleson, combined his two great passions: sex and politics. The result is a provocative romance that sizzles with both wit and ideas where the central theme is that of income inequality. How modern is that?

Dare Bellingdon is an apparently empty-headed debutante , who craves something more than marriage to her beau, Maj Ronald Clive, who is standing for Parliament as a Conservative. His opponent, the passionate and crusading Tom Smith, a firebrand, standing for Labour, presents new ideas about social reform and the redistribution of wealth, altogether a more attractive vision of a personal and political future. Not a polemic on either side, Malleson, one of the major playwrights of his time, carefully analyses Dare’s choices, sexual and political, in 1920s London.

Jessie Shelton stars as Dare and the play is directed by Mint Theater stalwart, Jenn Thompson.