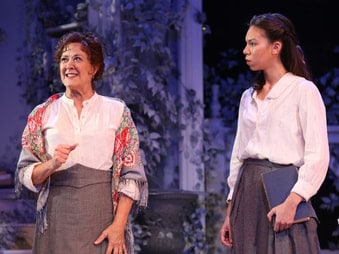 When George Bernard Shaw’s most infamous and provocative play premiered in New York in 1905, the entire cast was arrested on opening night. Not because the play deals with the subject of prostitution but because in it a woman dares tell the world that she lives her life according to her own principles and not within the narrow confines of her society.

At a time when women had no legal rights at all, Shaw challenged every aspect of women’s lives, examining how a woman could build a global empire on her own terms and set an unlikely example for her daughter and other women of her time.

In this highly amusing and timely play, Shaw examines how six dynamic people finally face their past to plan for their future, including the mysterious title character Mrs Warren and her daughter Vivie.

A fine cast, led by Broadway veteran Karen Ziemba  as Mrs Warren and Nicole King, a newcomer, as Vivie, brings to life words by the most amusing and insightful playwright in the English language, the always-rascally George Bernard Shaw.

​The production is directed by David Staller, who is a Shaw scholar and the much respected head of the Gingold Theatrical Group which is dedicated to Shaw’s plays..
Read more