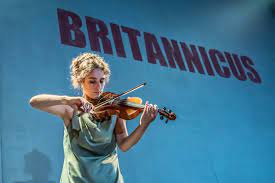 Playwright Timberlake Wertenbaker has done a spectacular job translating and adapting Racine’s Roman tragedy for a contemporary audience. Instead of our usual view of the Emperor Nero as mad, bad and extremely dangerous to know from birth, this adaptation shows how he got that way. Guided by Agrippina, his appalling and insanely ambitious mother, isolated in his palace, and coddled by courtiers without conscience, it is possible to see how a spoilt brat turned into a monster.

The acting from the entire company is strong, especially from Sirina Saba as the vicious designer-clad Agrippina and William Robinson as a directionless teenager who happens to have become Emperor of Rome thanks to a mother who has edged out the rightful heir, Britannicus (Nathaniel Curtis, excellent), in his favour. As Agrippina’s hold on her son loosens, Nero becomes increasingly deranged, ending up, inevitably, playing the lyre (violin) while the stage is suffused in red light so we must assume that Rome is burning. If it’s not, it should be.

The production, by Atri Banerjee, is simultaneously stripped-down and overly fussy. The entire sparse cast sits on the many chairs which, together with a water cooler, comprise the entire set and which are constantly moved about to no great purpose. The actors distractingly stay on stage even when they are not part of the action of the play, as though they are in a dentist’s waiting room, and, apparently because the director wants us to know what an unstable and frightening place Nero’s Rome is, he has them all, from time to time, judder, shake, crawl across the floor, fall down in horror, and wander about at the back of the stage, and then calmly sit back down on a chair to await their next entrance.

A ‘director’s concept’ production. There is much to admire here, not much to enjoy.

« Just in: An American wins the Belvedere Competition