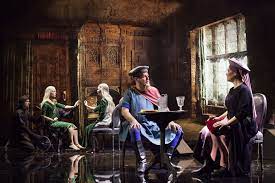 Opera of the Week – An attempt to update La Juive?

Slippedisc courtesy of OperaVision is streaming the opera ballet The Convert (De Bekeerlinge) from Vlaanderen.  The Belgian composer Wim Henderickx and librettist Krystian Lada have created a new opera from Stefan Hertmans’ haunting novel about identity, impossible love, faith and human strength. Western early music, modernism and film music merge with Jewish and Arab traditions to create a contemporary opera in which Vigdis’ epic story is told through sound. Koen Kessels tackles the challenge of conducting not only the Orchestra, Chorus and Children’s Chorus of Opera Ballet Vlaanderen, but also a cast with singers from different vocal traditions, instrumentalists who play the qanûn, duduk or oud, and a newly formed city choir made up of Antwerp citizens from diverse backgrounds.

Lore Binon sings the role of Vigdis. Sung in English with subtitles in English and Dutch.

The Plot: in times of religious violence, the young mother Vigdis Adelaïs is torn between her Christian upbringing and the Jewish faith, to which she has converted for her beloved.

Rouen, 1087. In an age of religious and political unrest, Vigdis Adelaïs grows up in a Christian family. When she falls in love with the Jewish student David, her life changes radically. Their forbidden relationship is discovered and Vigdis flees with her beloved, taking on the Jewish name Sarah Hamoutal. In David’s native city of Narbonne, she is converted to Judaism before they eventually take refuge in the village of Moniou, where life smiles on them, for a time.

The First Crusade reaches Moniou. The synagogue, in which the entire Jewish community is gathered, is barricaded and set on fire. David is killed, and Hamoutal sees her two eldest children, Yaakov and Justa, being kidnapped by soldiers.

Vigdis decides to travel to Jerusalem to look for her children. Her quest brings her from Marseilles, across the Mediterranean, to Alexandria. There, once again, tragedy strikes. Her third child dies and she is violently assaulted. In Fustat, she decides to build a new life and remarries. When she hears that her kidnapped children are still alive and living with her parents, she travels back there without delay.

Vigdis progressively loses her grip on reality and ends up in Nájera where, as Jewish convert, she is prepared for the pyre by the Christians. Her freedom is eventually bought, and again, she goes on the run. Her last trip does not lead her to Rouen, but to Moniou, the place where she was once so happy. Broken by the many trials she has endured, she ultimately dies in the ruins of the synagogue.
Click here

« A gift of Chopin in the Russian ruins of Irpin