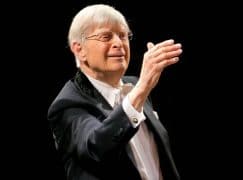 The veteran Swedish conductor, 95 next month, has suffered a physical setback ahead of a series of birthday concerts in Berlin and Vienna.

The Staatsoper unter den Linden reports that he is in hospital after a fall:

Herbert Blomstedt, unfortunately having a fall yesterday afternoon, has to cancel the upcoming subscription concerts of the Staatskapelle Berlin on June 27 and 28.

He is feeling better, but will remain in hospital for observation for the time being.

We are thinking of Herbert Blomstedt and are extremely grateful to Christian Thielemann for stepping in at short notice for Herbert Blomstedt and taking over as conductor for tomorrow’s Monday and Tuesday’s concerts at the Staatsoper Unter den Linden and the Philharmonie. Anton Bruckner’s Symphony No. 7 in E major remains on the program. Instead of Mozart’s Symphony No. 34 in C major, KV 338, Wagner’s Prelude and Liebestod from TRISTAN UND ISOLDE will be heard.

« The Devil is in Munich’s detail