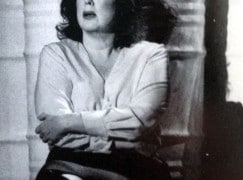 Death of a New York diva

We have been notified of the death of Sheila Nadler, a New Yorker who gave a memorable 1991 world premiere as Mrs Klinghoffer in John Adams’s deeply flawed opera, The Death of Klinghoffer.

A dramatic mezzo who attended the Maria Callas Master Classes at Juilliard, Nadler sang at all major US opera houses and many abroad.

Her friend Manuela Hoelterhoff writes:
… At the world premiere in Brussels in 1991 of John Adams’s “The Death of Klinghoffer,” she brought memorable pathos to Marilyn Klinghoffer, whose husband was murdered and tossed overboard in his wheelchair from a cruise ship by Palestinian high-jackers. She deplored the work’s bland title.

At Santa Fe in 1995, she made us laugh as John Ruskin’s bossy mom in David Lang’s “Modern Painters” for which I wrote the libretto. Probably the only meal she ever cooked was a soupy fish mess inspired by her aria, “Stewed Trout! Stewed Trout! Just for John!’’ She hoped to reprise the role at the Glimmerglass Festival in Cooperstown, but over the years many exes, friends and colleagues peeled away.

She could laugh at herself. “What happened to my high note?” she would gasp — remembering a historic concert of “La Gioconda” at Carnegie Hall in which a high G proved fugitive. Melodramatically weaving around the piano at my apartment as La Cieca (a Blind Senior) Sheila would reprise “Voce di Donna” topped off by a shriek. Waaah!

Dementia was only slowly diagnosed since one of her big acts was the demented diva. She gradually stopped rereading her favorite Alice Hoffman novels and biographies of the Sapphic poets of early twentieth century Paris. She forgot the passwords to her many email accounts.

« Breakthrough: UK schools are ordered to teach one weekly hour of music

The Devil is in Munich’s detail »