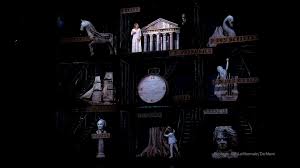 Jonas Kaufmann wowed Australia as Lohengrin, but no-one could make head or tail of the set.

…. The opera is directed by Frenchman Olivier Py, in a co-production with the national opera of Belgium, the Théâtre Royale de la Monnaie in Brussels….

In Cy’s rendering, however, we are presented with an apocalyptic post-World War II landscape where death reigns. Graffiti daubed on walls quotes from Paul Celan’s poem Todesfuge (1945). Other scenic interpolations are drawn from esoteric Nazi iconography – such the Celtic Cross and the Black Sun (Schwarze Sonne).

This is not unusual. Over the past 80 years or so, operas have increasingly been reframed to provide a vehicle for commentary: either on the composer and society that created them, or on our own times. The original plot and setting is something to be riffed off, rather than revered or reproduced.

In Europe, useful background and context for these interpretative overlays is usually provided to the audience through accompanying program essays.

In Australia, we seem to be missing out on such outreach….

2 US violinists, 2 Ukrainians in Sibelius final »