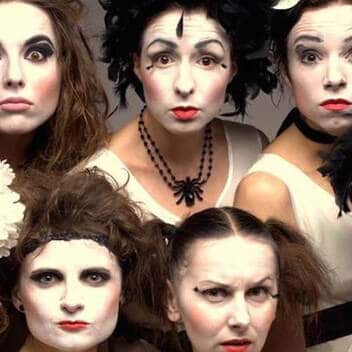 Click here for tickets : subscription tv
​Roses is a touching and all too real Ukrainian musical documentary, featuring the seven actress/singers of the Dakh Daughters Band, shot on stage, in dressing rooms and on the road, while they were living through the pivotal moment of Ukraine’s 2014 Maidan Revolution.

This political cabaret draws its magic from combining the joie de vivre of a creative community with the horror of the devastating war under bright stage lights. Roses paints a picture of artists under extreme conditions of pain and loss.

The film shows revolution through the eyes of the artists – through female eyes – which gives it a particular perspective: humane rather than epic, celebrating life rather than heroic deeds. It captures the 2014 inception of what is going on in Ukraine today – incredible unity of the Ukrainian people standing against the Russian assault on Ukraine, Europe, the free world.
Watch Roses not for its music, (redolent of Weimar cabaret but far less comprehensible and a lot louder), but for the insight into Ukrainian resistance to evil then and now.

« A competition in how not to sing

But can she manage Barenboim? »