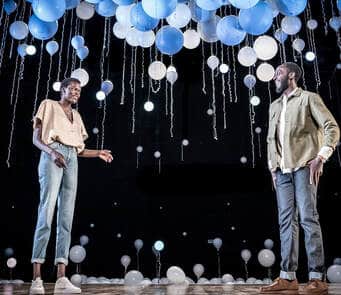 Since winning two Olivier Awards – one for Best Revival, the other for Sheila Atim (see photo)  as Best Actress in a Play – the Donmar Warehouse is now making this critically acclaimed revival of Nick Payne’s Constellations available for an additional four weeks on demand until 25 May.

You may remember that this two-character fantasy, about bees and nuclear physics, was produced last year with eight different actors in an innovative producing model, devised in response to the pandemic. ​
​Donmar Warehouse Artistic Director Michael Longhurst (nominated for an Olivier) rehearsed four different casts, each refracting the play afresh. Sheila Atim and Ivanno Jeremiah, Peter Capaldi and Zoë Wanamaker, Omari Douglas (also nominated for an Olivier) and Russell Tovey, and Anna Maxwell Martin and Chris O’Dowd, were filmed during the run at the Vaudeville Theatre, where they broke box office records.

This was a fascinating and successful experiment, now repeated online, allowing theatre lovers to see the same play four times if they so wish, or just once with their favourite actors.​
Constellations was one of the first productions to open post pandemic, and ran from June until September at the Vaudeville Theatre. Now we have another opportunity to see how each set of actors tackles this very strong play.

How Sweden lost a great composer »