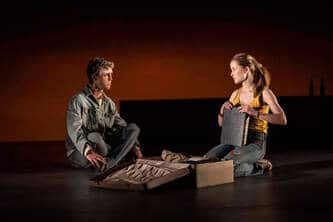 Jude and Acton’s father has fallen from a high building. His teenage children play a bizarre game in which they imagine what he was thinking as he fell to his death. Jude, at 16, works nights and weekends to pay the bills, and is a tiger in defence of her brother,14-year old Acton. At school, two older boys protect him from bullying but, in return, require the use of their basement as a meeting place for their club. The consequences of what they do in their club will not become clear for fourteen years. What happened the night of Jude’s 17th birthday party is eventually revealed and it isn’t as big a surprise as it should be.

In fact, nothing is. What should be shocking revelations of rape, violence and the betrayal of trust, with their inevitable long term effects on their characters’ lives are undermined by flat writing and the static production by Sarah Frankcom.

Award-winning American playwright Naomi Wallace’s play takes place in two timeframes with two casts playing the same characters as teenagers and as adults. A competent cast is unable to save a play seemingly deserted by its production.