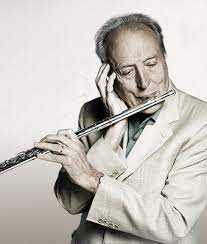 Death of a flute legend, 85

We have been notified of the passing of William Bennett, one of the most admired and prolific flute virtuosos on record.

Bennett, known as Wibb*, made more than 100 albums as soloist or as principal flute with major UK ensembles, most notably with the English Chamber Orchestra. He covered all periods from baroque to contemporary. At the time of his death he was president of the British Flute Society.

The son of two architects he studied in Paris with Fernand Caratgé, Jean-Pierre Rampal and Marcel Moyse.

Roll on the gay times in US orchestras »