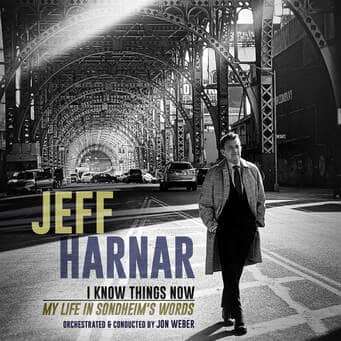 Click here for promotional snippet.
​
Fans who saw MAC Award-winning cabaret artist Jeff Harnar  in his dazzling show I Know Things Now:My Life in Sondheim’s Words  in London at The Pheasantry last month clamoured for a CD or album as a memento of the performance but there wasn’t one. Now there is. And for American afficionados of Harnar and Sondheim, there are a number of upcoming live performances in New York and elsewhere.

Stephen Sondheim himself saw Harnar’s show and endorsed and encouraged this new take on his work.The album contains more than 25 songs from the late Broadway composer-lyricist’s songlist which give Harnar the chance to tell his own life story.

“The words and music are Sondheim’s, but the story is mine,” says Harnar. “The show is unique in that it is sung-through, with every word from my mouth a Sondheim lyric. And yet, the piece could not be more personal. In the words of Sondheim, ‘What more do I need?’ This is a unique experience for me, as it is my first solo show sung as an openly gay man, honestly sharing my story and my heart—with the correct pronouns. For the first time the songs I’ve chosen, many originally introduced by women, are clearly being sung to and about the men in my life.”

The Sondheim songs—which include “Being Alive,” “Losing My Mind,” and “Live Alone and Like It”—have been given new jazz arrangements by jazz pianist Jon Weber, who serves as the album’s arranger, orchestrator, and conductor, leading a 20-piece orchestra. The live concert edition of I Know Things Now is directed by Broadway legend Sondra Lee,  an original cast member of Broadway’s Peter Pan and Hello, Dolly!

I’m hoping for a full video of the show before too long but, in the meantime, here’s a little promotional snippet to give us the flavour of this wonderful show.

« Salzburg, we have a problem