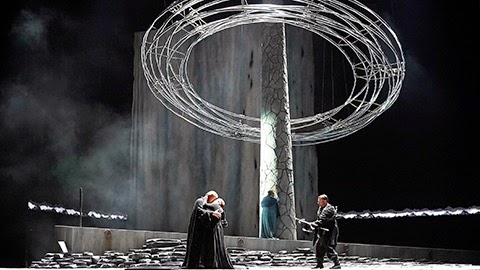 Tristan in Vienna is always a shipwreck

Comment of the Day comes from our Vienna-based critic Larry L. Lash:

Having reviewed the last two new productions of “Tristan und Isolde” at Staatsoper, I beg to differ.

Isolde places a (memorable) curse on Tristan in Act I, and it’s apparently held quite well in Wien since the work’s local premiere in 1883.

In 2003, Günter Krämer’s contract was torn up after his attempt to replace the August Everding production from 1967. In those days, Staatsoper sat critics all together, in Parkett links, Reihe 12 (I don’t know if this practise holds since I eventually requested a seat from which I can look down on the stage; as I am rather short and my view was always obstructed). Of course, critics don’t boo – we are supposed to use our words and trust our editors to get out news, be it good or bad (I have broken this rule only once, by booing my head off at a Salzburg premiere). But in a concerted effort during the curtain calls, we rose as one and turned our backs to the stage when Krämer came for his bow.

I had to attend another performance in the following years, to report on a major cast change and/or role debut. The person next to me saw me jotting down notes during the first act and, at the Pause, asked me if I could explain what we were seeing, specifically the location (“Where’s the ship”?). I replied that it was either an upscale sushi bar or perhaps the emergency entrance at a private hospital.

In 2013, when the Krämer production went on the trashheap and the McVicar opened, I ran into a dear colleague who I hadn’t seen in several years and the first word, simultaneously, from both our mouths was “Melancholia”! From the second the curtain rose, it was clear that McVicar was a fan of Lars von Trier.

Thankfully, I only had to attend the opening and never go back, as I saw not one original idea, and some rather lacklustre and nerve-dulling scenery (I wish there was someone around to explain to me where we were in Act II). In my experience, McVicar (ictured) has one basic idea and merely puts some spin on it to (hopefully) identify the place and time.

Despite having a more varied palette than McVicar, Bieito’s constant factor is that there will be something to offend everyone. Now that I am (mostly) retired, I choose to avoid his productions (as I do with several other Regisseurs).

Had there been any question, I would still skip this run of the production. Martina Serafin gave us all good reason when she squawked her way through the “Liebestod” at last year’s season-preview press conference; has there ever been a more boring Heldentenor than Schager, whose theatrical behaviour makes Jess Thomas look like the Daniel Day-Lewis of the opera stage?

Regensburg finally gets a girl »