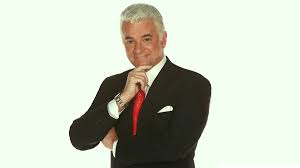 A Man With Standards – John O’Hurley

Award-winning actor John O’Hurley  has catapulted into one of Broadway and television’s busiest and most versatile actor/show host, Broadway star, as well as being a New York Times best-selling author. As a composer/pianist, both of his albums “Secrets From The Lake” and “Peace Of Our Minds” have reached the Billboard charts.

O’Hurley is best known as “J. Peterman” on “Seinfeld” which is now the #1 syndicated show in the world and can be seen in 85 countries. John won a Screen Actors Guild Award for his work on “Seinfeld.” On Broadway, he is best known for his many performances as King Arthur in Monty Python’s “Spamalot” and his continuing portrayal of slick lawyer, Billy Flynn in the Broadway legend “Chicago”, which earned him Best Actor status in the city of Chicago in 2011.
​
Purchase of the Livestream ticket includes both the 5 Camera HD LIVE Streaming Event + 14 Day Unlimited Access to the VOD that is posted the following day. If you missed the Livestream performance you can purchase the VOD of the show the following day then watch unlimited until it expires two weeks from show time.