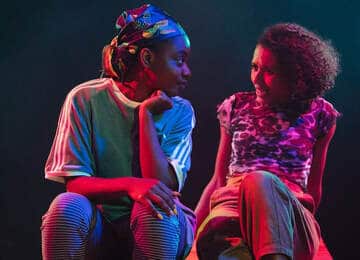 27 March – 17 April
Following the successes of its sold-out 2019 premiere and subsequent run in 2021, this award-winning play is now available to stream worldwide for three weeks only.

seven methods of killing kylie jenner (not me being eccentric, this is how the Royal Court, and presumably the playwright, fails to capitalise the title) explores cultural appropriation, queerness, friendship and the ownership of black bodies online and IRL.

Holed up in her bedroom, Cleo’s aired twenty-two WhatsApps from Kara and has cut off contact with the rest of the world. It doesn’t mean she’s been silent though – she’s got a lot to say. On the internet, actions don’t always speak louder than words…
Jasmine Lee-Jones won multiple awards for this, her debut play. It was directed by Milli Bhatia and won the Evening Standard and Critics’ Circle Most Promising Playwright Awards, and the Alfred Fagon Award. She originally developed as a writer through the Royal Court Theatre’s Young Court programme as part of their commitment to nurturing new voices. Milli Bhatia was previously Trainee Director at the Royal Court, and is now an Associate Director. We are warned that this production contains use of racial slurs and mentions of sexual violence.
​
seven methods of killing kylie jenner was originally part of the Royal Court’s Jerwood New Playwrights programme. The Guardian’ critic called it, “Unmissable and exhilarating.”

« Male soprano is the new label accessory of 2022

First with the news: Gergiev’s massive wealth is exposed by Navalny report »