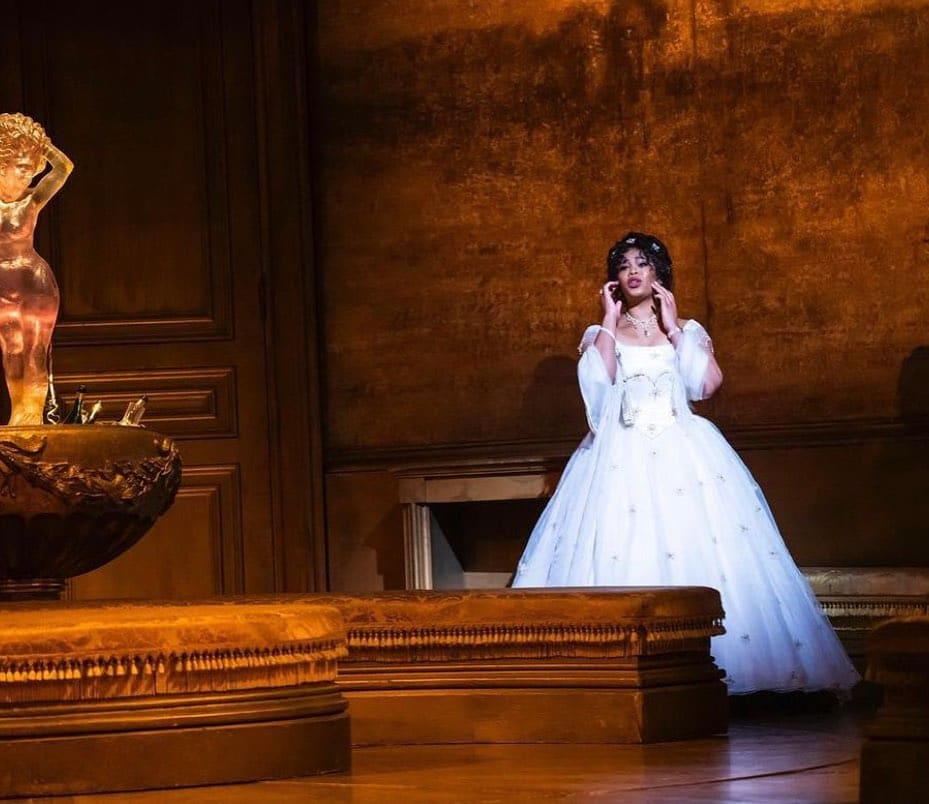 Pretty Yende has a morning-after debut

The South African soprano made her Violetta debut at Covent Garden at 11.30 yesterday morning.

And it came after one of the most extraordinary nights of Peter Grimes ever seen on a world stage.

Hugh Kerr was there for Slipped Disc. He writes:

From the sublime to the second rate?

This was my feeling after the morning (11.30 am !) launch of the latest cast change of Covent Garden’s La Traviata on April 2. This crowd pleaser is being put on no less than 27 times this season with 6 casts. The Royal Opera has become a Traviata house, or as some might think a travesty house of what an opera company ought to be.

There was a pretty full house on Saturday morning ,many of them excited to be there for the first time and thinking it was “wonderful”. For the more experienced, it was a disappointment after the sublime Peter Grimes of Thursday night which I reviewed for Slipped Disc and the Edinburgh Music Review we got a second rate Traviata with a second or third string cast. An experienced opera goer sitting next to me never reappeared after the first act! I was tempted to do the same but was restrained by my need to review it.

There is nothing wrong with Richard Eyre’s 1996 production but surely a leading opera house ought to innovate. With the cast changes for Traviata come conductor changes. The latest was Giacomo Sagripanti a young Italian who has won awards but seemed intent on making this the slowest Traviata on record. His overture pace was funereal and Traviata limped rather than leapt into the action of the opening party scene. Here we were introduced to Pretty Yende as Violetta and Stephen Costello as Alfredo.

Pretty Yende is the first of 3 Violettas in this 11-night run of Traviata. At 37 she is no longer a young sensation from South Africa but an established star. Yet this morning I found her first act disappointing with occasionally wobbly coloratura and less than convincing lower registers. She got better in subsequent acts but never reached the heights of classic Violettas or even more recent ones such as Ermolena Jaho who entranced me in 2019 at the Garden. Stephen Costello is also an international tenor of repute but I found him disappointing; he has a head voice somewhat nasal in delivery and didn’t convince me that he was passionately in love with Violetta in act one. I remember Pavarotti saying you should sing from your stomach ,something Costello clearly didn’t attempt. Again he got better in later acts but left me underwhelmed compared to not only the greats of the past but even more recent Alfredo’s such as Charles Castronova or Joseph Calleja .

Dimitri Platanias is now at 51 a veteran of Covent Garden performances and the Greek baritone rarely disappoints but again I found his Germont somewhat understated and compared badly with the great baritones of the past ,although he certainly was better than Placido Domingo’s attempt at the role I saw most recently. The rest of the cast were fine and the the chorus and the ballet dancers did their best to inject life into this rather limp performance.

Of course it is the curse of experienced opera goers to be disappointed when performances don’t measure up to great nights of the past. But it is also the job of the critic to be critical and for me this was the most underwhelming Traviata of the many I have seen in the past. Still it will no doubt fill the house most nights and that may be important for the economics of Covent Garden but is it enough?

« Big guns are blasting in at the Czech Philharmonic

Peter Gelb: There was no moral dilemma in sacking Netrebko »