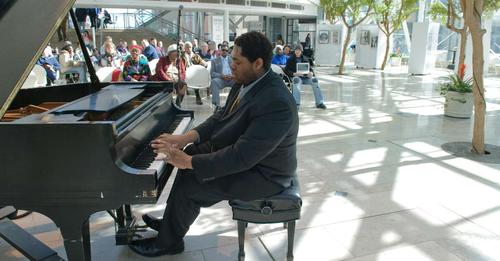 Police taser victim is named as a gifted pianist and composer

A man named as Herman Whitfield III, 39, died early on Monday after Indiannapolis police used a stun gun on him after being called out by his father on a mental health emergency issue.

NBC Reports: The police department said officers tried unsuccessfully for more than 10 minutes to negotiate with Whitfield before he “moved quickly towards an officer.” The officer used his stun gun, hitting Whitfield in the chest … Read on here.

The pianist Antonio Pompa-Baldi writes:
There are things that are too hard to accept, even in the unjust world we live in. Herman Whitfield was a wonderful human being. This is shocking, sad, horrible, and maddeningly so avoidable! All of us who knew Herman remember him as the gentlest of giants. Aside from his immense natural power, at the piano he could produce the most exquisite pianissimos in Fauré, a composer we both deeply loved. His hands made even mine look small, and the keyboard look a bit like a toy. Perhaps because of this, the impression produced by his sweet, sophisticated, delicate nuances was even greater. He was kind, caring, compassionate, intelligent, gifted in many ways, and he would never hurt a fly. He was an enormously talented composer. I am grateful to have known him, and to have had him as my student. His passing, at such a young age, would have been a tragedy in any case, but the manner in which it happened is unacceptable. This should not happen in a civilized world, and yet it keeps happening all over this nation. My thoughts and prayers are with his family, but I cannot help feeling that we need change, and we need it now. Something must be done. We need to stop sending police to medical emergencies, and we need to stop using violence to de-escalate situations like this one. We must train responders, and have more medical personnel sent in, rather than police with guns and tasers.
The world lost a great soul.

The conductor Charles Latshaw adds:
I feel like I somehow have an obligation to share Herman’s story. He and I did several small musical projects together back in 2005-2006, and he was the kindest, gentlest, most intimately-personally-honestly musical person I knew.
When I had a youth orchestra in Indiana, Herman was the first person I went to for a “mini-commission”; I was seeking composers to write short 2-3 minute pieces, so the students could get to know a composer directly and work with them to create a new piece. What a joy it was to see the kids’ faces after we’d read a piece by this new composer, and he showed up the next week, a complete bundle of contradictions and subverted expectations. He was huge — 6’2″ and fairly heavy, with hands like oven mitts, but spoke so gently and softly and wrote peaceful quiet music and played the piano with real patience and finesse.
I’d asked him to write a piece for kids under 3 minutes, and had given parameters like “sharp keys are better, up to 4 sharps. Faster is easier than slow. Don’t ask kid string players to hold a note longer than 4 beats. They can play just about any rhythm, as long as they’re all playing the same rhythm.”
He came back a few days later with a piece that was about 5 minutes long, in 6/4, quarternote=52, for contralto and strings, sung in Japanese, IN G-FLAT MAJOR! He said simply, “I couldn’t help myself. This is what came out.” And it was gorgeous, and everything was written exactly how it had to be written, despite all my fussy instructions. I need to go find that piece. I must have it tucked away somewhere.
Herman’s death is a tragedy. And it brings up painful memories of Eric Garner and other unnecessary, preventable deaths of black men at the hands of police. I’m just at a loss. I’ve kept quiet about it for years, but I just can’t keep this one to myself. We must do better.