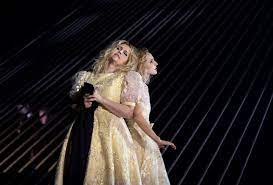 Roger Vontobel’s new production of  Wagner’s The Flying Dutchman  is being streamed live tonight from its opening night in  the Nationaltheater Mannheim  by Slippedisc, courtesy of OperaVision.  The Flying Dutchman has some of the most rousing music ever written for opera. It is sung in German with English subtitles.  The Dutchman is sung by Michael Kupfer-Radecky, Senta is sung by Daniela Köhler.  Conducted by Jordan de Souza.

Background: Richard Wagner came across the legend of The Flying Dutchman in 1838 through Heinrich Heine’s From the Memoirs of Herr von Schnabelewopski. After a stormy voyage from Riga to London – Wagner was again on the run from creditors – he chose the material for his next opera and began to compose it, with the unpredictable power of the sea still fresh on his face. Against the backdrop of this wild nature, Wagner exposes in Holländer his utopia of a love that transcends, offered as an antidote to the 19th century zeitgeist of pounding industrialisation and economic growth.

The Plot: a captain is cursed to sail the seas of the world forever, only allowed to make landfall once every seven years. Will he find the love of a faithful woman to break the curse?