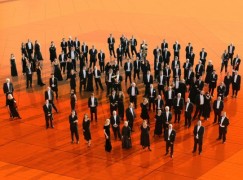 A statement by the opera house of the oligarch Mediterranean enclave argues that the Russian singer has denounced the war and is therefore fit to return to the worls opera stage.

The statement says: ‘Anna Netrebko made a statement two weeks ago regarding the war and her relationship with Putin. She has taken a clear position against the war in Ukraine. As a consequence, she has been declared an ‘enemy of the homeland’ by the speaker of the Duma and a theater in Novosibirsk canceled her appearance.’

This is wilfully untrue. Netrebko claimed she had little to do with Putin, when the known facts prove otherwise. Her recent dissociation from the Ukraine invasion does not refer to it as such. And she has not uttered one word of criticism against the Russian president or his policy.

Monte-Carlo is both tax-free and conscience-free. It will give Netrebko an empathetic welcome.

(The picture is of its philharmonic orchestra.)