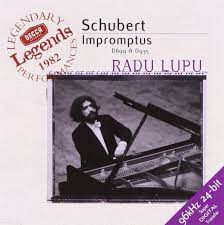 How we made records with Radu Lupu

Michael Haas remembers the trouble and thrills of working with his first artist at Decca:

Around 1980, I was entrusted with my first recording as producer: Radu Lupu and Schubert. It was an insane idea from the Great-and-Good of Decca who obviously wanted me to sink or swim. Thinking back to these sessions in Kingsway Hall in Central London, I wonder how I didn’t sink….

I also only had myself to blame for letting everyone at Decca know that of all the Decca pianists, Lupu was the one I most admired. Unknown to me, nobody else at Decca wanted to work with him. He was notoriously difficult, neurotic, insecure and in a constant state of frustration. In my ignorance, I only believed my job to be spotting fluffed notes, marking them in the score and doing a retake. Fluffed notes were the least of Lupu’s concerns. They usually began with the piano and the Steinway technician filing down or administering a special liquid to hammers in order to equalise tone, brightness, dullness of each key. Lupu would play something and then ask, “is the F# too bright? I’ll play it again!” The technician would go back into the studio and spend the next 30 minutes with the guts of the piano on his lap.

As someone interested in the piano-esque part of piano playing, I was fascinated by his passage work – perfectly even and articulated while at the same time gliding from pitch to pitch like a singer. How he did it was his secret. (“You like good articulation? Listen to Perahia!”) Murray Perahia was Lupu’s secret rival, though one whom Lupu admired more than others. His only other comment to me regarding other pianists was András Schiff – “the only young one of any interest” he once stated dryly. I then worked with Schiff and pushed for Decca to sign him, which it did and we went on to record Bach and Mozart together. But there was a difference. There was something narcissistic about Schiff’s playing and his interpretative ideas. Lupu was anything but a narcissist. Lupu had a total command of structure and though he was constantly fretting about it, an astonishing technical command of the instrument. But it was this sense of architecture that made him different and explained why he hated recording….