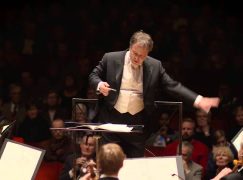 The Finnish conductor Sakari Oramo has been renewed as Chief Conductor of the BBC Symphony Orchestra for another four years.

He said, they said:

Sakari Oramo, Chief Conductor, BBC Symphony Orchestra, says:
I am very happy and beyond excited to continue in my position as Chief Conductor of the BBC Symphony Orchestra until the summer of 2026. On the musical, artistic and human level, I couldn’t imagine any better environment than this musical family consisting of the Orchestra, the BBC Symphony Chorus and the BBC Singers. I hold dear our contribution to public service broadcasting, bringing the highest quality programming and music making to everyone in the UK and widely overseas.

Paul Hughes, Director, BBC Symphony Orchestra & Chorus and BBC Singers, says:
Sakari joined the BBC SO as Chief Conductor for the 2013 Proms and the relationship has strengthened and deepened year-on-year becoming the great musical partnership it is today. Knowing that Sakari will continue in this role through until 2026, to see the orchestra into its new home in Stratford’s East Bank, is fantastic news for the orchestra, for the BBC and for our audiences around the world. I could not be happier.