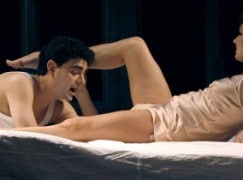 Comment of the Day from the tenor Nathan Granner:

People are now allowed to have boundaries. We explore those boundaries for each person involved with the scene, including other cast and crew, who may or may not be integral to the focus of the scene.

Some folks are modest and others are more open about their bodies and interpretations of their characters.

It IS like fight choreography in a lot of aspects…

“Romeo, quas tus donc?” Is a perfect example. One can create a feeling of comfort on the stage that immediately translates to the audience. Your singers are happy and not scared that their partner is going to ram their tongue down their throat (unexpectedly). There is a predictability there.

With an Intimacy director, we take the time to first, see where everyone is at. There are traumas in some our lives which make it impossible to give or receive even basic touch.

Regardless of the insensitive comments about “working it out in therapy” (I mean seriously, that’s a whole other topic), we would rather our colleagues and friends not feel subjugated.

So we will take the time to make the scenes real enough going from cheek peck to hot and steamy, but not at the cost of our own ideals and levels of sensitivity.

It’s not just about the actor and the production on stage, it’s about YOU too.

If you read in the program credits that an intimacy director is among the team, you will know that at least what is happening on stage is at least consensual, if not people at last having fun playing their characters, rather than thinking oh my goodness how terrible what they’re doing.

My suggestion for you folks who think opera should only be done in a very particular manner should contribute more, so that more new operas are commissioned. We can let the Bohemes be Bohemes in a functional museum style production, if we have more tales to tell that reflect our society today.

Isn’t it weird though that operas that were once controversial and even dangerous are now considered standard fodder.

Ironically, I find wading into this morass of commentary quite uncomfortable. There are lots of strong opinions here that do not jive with my mindset.

But with all the thoughts I really only saw one or two that had an accurate take on this.

I maintain this is a good thing for singers, for production and more, for you our patrons.

« Watch: Odessa Opera sing Va pensiero as they prepare to defend the house