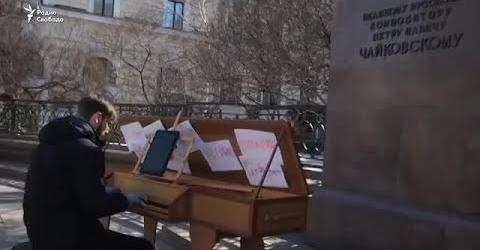 The keyboard player Vladimir Ivanov-Rakievsky set up his instrument outside the Tchaikovsky Conservatoire on Friday and proceeded to play Bach in the midst of a sheaf of anti-war slogans.

In a brief statement, he says: ‘It was an extemporaneous open air concert, a concert against the war in the Ukraine. I have relatives and friends in the Ukraine. And I get the information about the situation in the Ukraine directly from them. And this is horrible. It’s impossible for me to keep silence here. I think it is just a drop in the ocean, which nothing will change. But for me as a person, it will be more easier to exist, after my small (modest) action.’

He left the site before police could arrive. His social media have gone silent.

Rakievsky’s act of defiance was filmed for Radio Liberty.

« Hans Zimmer is the Oscar winner