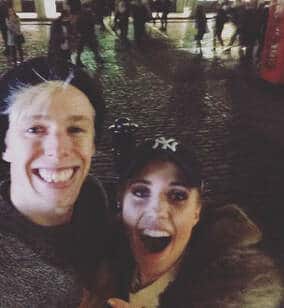 Does anyone recognise these singers?

Click here to watch
A bitterly cold night in London’s Covent Garden. A street singer is entertaining passers-by with a song from Andrew Lloyd Webber’s ThePhantom of the Opera . A pretty girl in the crowd asks him for another from the same show, All I Ask of You and offers to sing it with him. “Are you any good?” he asks, tired of the endless stream of drunks insisting on singing with him. She encourages him to start the song, then shares his mic.

This video, obviously shot on someone’s phone, in the dark, was sent to me by a New York friend. When we first saw it, neither of us knew who these singers were or where they were or whether they were standing outside a station or a shopping mall, or even which country they were in.

I love the expression on the busker’s face when he first hears her beautiful voice and realises that the impromptu partner of his dreams has just happened by. He doesn’t believe it. They are both thrilled to have found each other on this freezing night.

Right from the start it was obvious that both are trained singers. My guess was that the woman is a professional musical theatre performer and that maybe he is too. But who are they?

Now, thanks to the detective work of another New York friend, we know more. He is Stephen Barry, a part-time busker from Ireland, who works in a gym between auditions. She is Celinde Schoenmaker, a musical theatre star from Holland, who has played Christine (the leading role) in the West End and in multiple productions of Phantom.
I hope Steve’s hat was full of money at the end of the song. And that there will be many more duets between these two strangers who have amazing chemistry.
My thanks to Alyce for sharing this lovely moment and to Sylvia for her successful sleuthing.

Under 35 Scheme at Wigmore Hall »