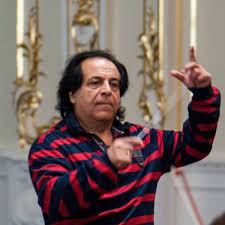 We have received this appeal from the conductor Alexander Rahbari:

I would like to put in a request for the whole international cultural societies to stop sanctioning musicians or sportsmen because they are, first and foremost, the victims of being good at what they do. To understand the situation one needs not go any further than my own case. It was in late 1979 that I was informed by Mr. Herbert von Karajan about the invitations I was frequently receiving to conduct various orchestras all across the united states following Mr. Seiji Ozawa’s recommendation as well as that of Mr. Wilford from the Columbia Artist.

However, all those programs were suddenly called off only because I was an Iranian and Iran was the center of turbulence after the American embassy hostage crisis. I was deprived of my basic rights as a musician and artist which alone, made me reluctant to go to the unites states afterward. There are popular musicians working and living everywhere be it Japan, Iran, Israel, the united states, Germany, or the united states. Definitely, they do not deserve to be sanctioned and outcast because of whatever might emerge out of the side of their politicians. I am an Austrian by citizenship and I do not know of any law here or anywhere else among the European country that forces their artists to take an affirmative stance on a political issue.

Thank you very much