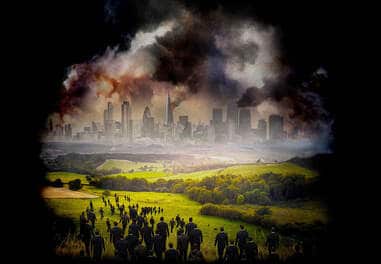 I’ve always admired this opera which was composed in the late 1920s by Kurt Weill and Bertolt Brecht, as a satire on capitalism and the inexorable industrialization of a society in which the ultimate crime is not having money.

Twenty scenes tell the story of a city lost in the desert and run by thugs; in Mahagonny food, sex, gambling, and violence rule supreme. Are they lampooning America? Or maybe the Weimar Berlin of the ‘20s with its rampant prostitution, unstable government, political corruption, and economic crises? Were they criticising their own world? Could have been either, both, or neither. In any case, the corruption they highlighted sounds familiar, or is that too cynical even for me?

Both Weill and Brecht were intrinsically left-wing Weimar artists, central to the artistic world that flourished at that time although they fell out in 1930 (when Mahogonny premiered) because Brecht’s politics were too extreme for Weill to be comfortable with him any longer.

This opera is, in places, a hard watch, being, like all of Brecht’s work, somewhat heavy-handed and humourless, despite its deft handling of the political issues which would come to the fore in the ‘30s. The music is sublime, the last flowering of Kurt Weill’s ‘serious classical’ compositions before he fled from Nazi Germany to France and then to the United States where the less complicated political and theatrical world of American musicals beckoned.

« Chailly, as young as it gets

Finland builds yet another concert hall »