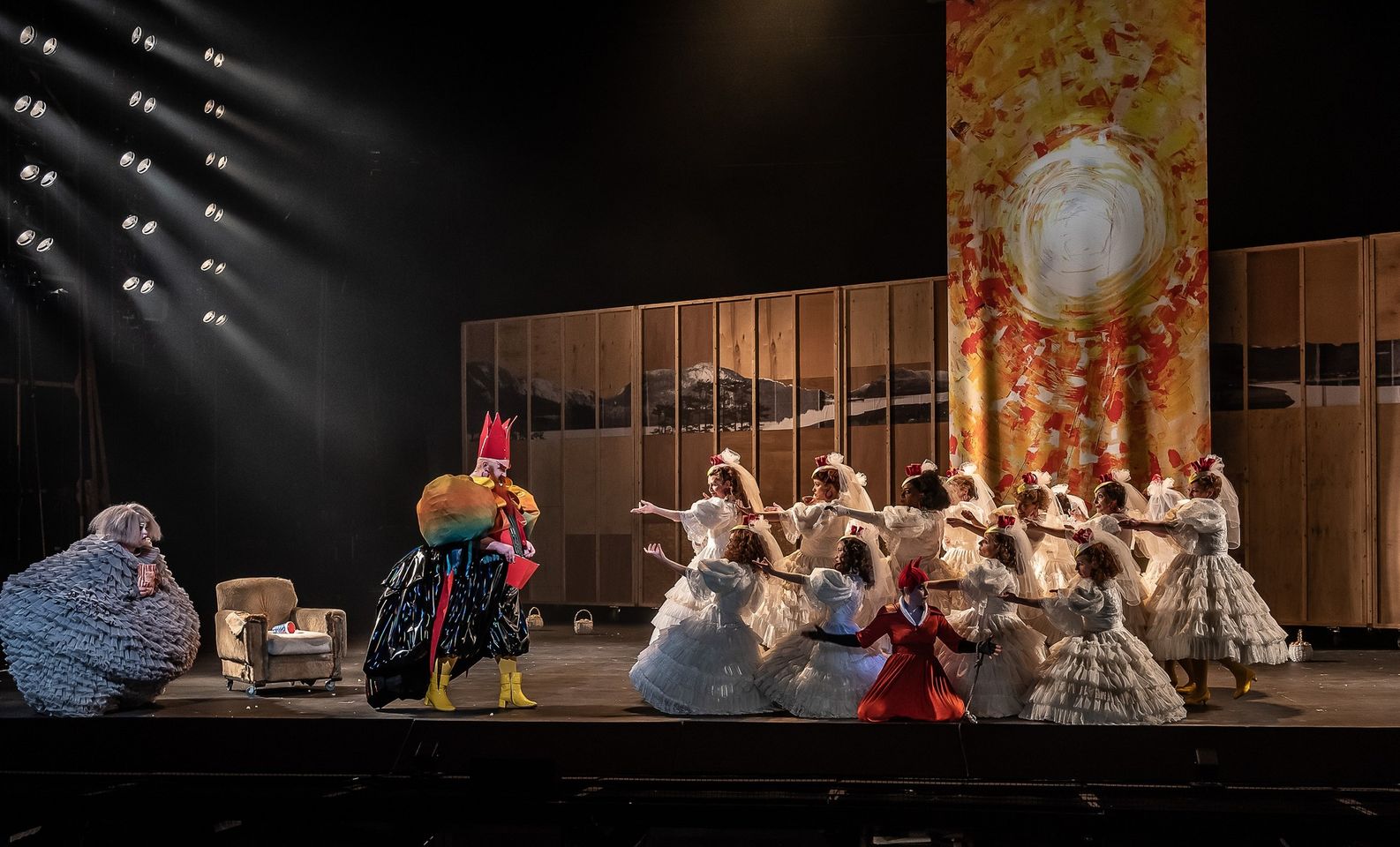 Alastair Macaulay was at the opening of English National Opera’s new production of The Cunning Little Vixen:

A vixen is the female of a species often regarded as predatory vermin. To turn such a creature into the enchanting, vivid, touching, poignant, naughty heroine of a three-act opera takes a fabulously subversive mind. Yes: the very mind shown by Leoš Janáček throughout his deeply entertaining and affecting The Cunning Little Vixen. This work, first staged in 1924 and a recurring work in British repertory since 1961, has just returned to London in a fresh and inventive new production at English National Opera.

To witness it is to be made newly aware how this opera transcends its own subversiveness. Vixen is a life-enhancing tragicomedy. Now exquisitely miniaturist, now sweepingly multi-layered, it’s about the cycles of life. Love, mating, parenthood, and death all become transitions within a larger process.

This production opened on Sunday 20 afternoon. (The original first night, on Friday 18, was cancelled due to Storm Eunice.) Director Jamie Manton takes to this large stage for the first time with assurance. Rather than create a single natural world in which animals and humans co-exist, he and designer Tom Scutt have given us a staging that’s about stories and story-telling – about metafiction. One narrow line of painted decor unscrolls as it descends to the floor, sometimes echoed by other vertical but static strips of décor, all depicting the forest at different times of day and year. Five other scenic components – tall horizontal boxes – are moved and revolved about the space. At the back, a door, sometimes opening onto piercingly white light, suggests a whole new plane of unknown reality beyond this stage realm. (Lighting is by Lucy Carter.)

All this accords with the current version of the translation by Yveta Synak Graf and Robert T. Jones. Where Janáček (who wrote his own libretto) adds a touch of narrative complexity by referring at the end to the newspaper serial from which he took his story (a human character cautions a junior vixen “so that people won’t write about you in newspapers”), this English account goes further: it has him sing of making “our life into an opera”.

This is at least one more level of artfulness than Janáček had in mind. And yet this opera’s beautiful innocence is maintained: Manton and Scutt never untell its story by over-cleverness. They make the animal characters great fun; likewise the anthropomorphic mushrooms and (most) insects. The Cock is a particular triumph, splendidly attired in a glossy tall vermilion crown (with matching red eyelashes and eyebrows), a rainbow-spectrum jacket, shining black baggy pantaloons over bright yellow boots. (The only ingredient that doesn’t work is the hunched, pedestrian body-language of the Dragonfly.) Sally Matthews – bright of eye and voice alike – has all the energetic swagger, irrepressible defiance, and, yes, the tender, naïve heart for the title character. The human characters are all physically slower and, fascinatingly, less spontaneous.

Janáček’s vocal lines often make it hard (harder, in my experience, in this opera than in others) for singers to make any English translation register; I was often grateful for the English surtitles. Still, the experienced tenor Alan Oke (Schoolmaster and Mosquito) and the young bass-baritone Ossian Huskinson made their (apparently effortless) diction telling, while Matthews certainly made most words count. As the Fox, Pumeza Matshikiza often showed the most gloriously burnished vocal sound of all (and great facial charm), but she too often sang under the note and with unintelligible words. As the foremost human character, the Forester, the baritone Lester Lynch has power and lyricism, tenderness and amplitude. Still, there are many passages in which he begins to bray, as he forces to make an important sound.

I’m not convinced Martyn Brabbins is a singers’ conductor. While everyone sings on cue for him, no English National Opera idiom emerges – whereas I remember how Reginald Goodall and Charles Mackerras elicited particular styles from their casts. He nonetheless catches many macro- and micro- aspects of the score: delicate chamber details, gripping symphonic architectures. On Sunday, a big ovation greeted every participant. The spell begun by Janáček pervaded the Coliseum.