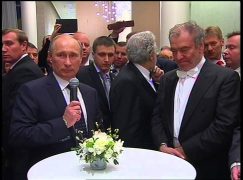 The hall announced tonight that, in consultation with the Vienna Philharmonic Orchestra, it has agreed that Valery Gergiev should not conduct this weekend, nor should Denis Matsuev appear as soloist. Both are close associates and apologists for President Putin.

Gergiev will be replaced by Yannick Nézet-Séguin.

A great deal of private pressure was applied to the hall to lead to this outcome. It is not yet clear if US Government pressure was also involved. This is the worst possible outcome for Gergiev, who will now face aditional demands from his Munich employers to distance himslf from the Ukraine aggression.

The Vienna Philharmonic, too, do not come out of it well.

UPDATE: Up to this morning both the VPO chairman Daniel Froschauer and Carnegie Hall’s president Clive Gillinson expressed a view that artists were entitled to political opinions. Both knowingly obliterated the fact that Gergiev and Matsuev are outright propagandists for Putin and his actions in Ukraine. Both will now need to justify themselves on assumptions of hypocrisy.

« Cleveland signs on for streaming