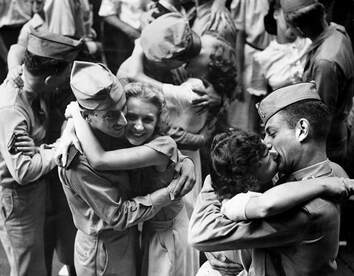 While The Sun Shines – Terence Rattigan
Click here for tickets: £15

The Orange Tree Theatre in Richmond is presenting the first major London revival of playwright Terence Rattigan’s greatest hit, While the Sun Shines.  When it opened in 1943 it played for over 1,000 performances in the West End which is some achievement even when there’s isn’t a World War going on.

It’s a bit old-fashioned (“a bit?”, I hear you shriek) but undeniably charming and we haven’t had the chance to see this work by the master playwright of the middle of the 20th century in decades.

On the eve of his wedding, the young Earl of Harpenden – Bobby to his friends – has offered his room to Joe, an American soldier he drunkenly met the night before. When Bobby’s fiancée Lady Elizabeth turns up, Joe makes a move, thinking she must be Bobby’s ex, the wonderful Mabel Crum. But a Free French lieutenant also has eyes for her and to complicate matters, Bobby’s future father-in-law turns up too. London in the Blitz, and identities get confused: time to make hay.

Directed by the Orange Tree Artistic Director, Paul Miller, While The Sun Shines stars a young and largely unknown cast.

« Exclusive: What to do if your music director is sleeping with a player