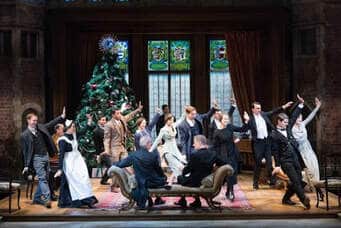 For the Royal Shakespeare Company’s 2014 production, starring Michelle Terry (now Artistic Director of Shakespeare’s Globe) and Edward Bennett as the warring lovers, Beatrice and Benedick, the director Christopher Luscombe set it at the end of the First World War.

Autumn 1918. A group of soldiers returns from the trenches. The world weary Benedick and his friend Claudio get reacquainted with Beatrice and Hero. As memories of conflict give way to a life of parties and masked balls, Claudio and Hero fall madly, deeply in love, while Benedick and Beatrice reignite their own rather more combative courtship.

Simon Higlett’s set was designed to resemble Charlecote Park, a Tudor estate near Stratford that Shakespeare would certainly have known. In fact, there’s a report that as a boy he was caught poaching in the grounds. The Edwardian period is particularly fitting for the aftermath of war that Shakespeare describes, young men returning, exhausted and battered, and trying to regain their pre-war insouciance while grasping at the possibility of a settled future.

Shakespeare’s comic romance plays out amidst the brittle high spirits of a post-war house party, as youthful passions run riot, lovers are deceived and happiness is threatened – before peace ultimately wins out.

« A Juilliard grad calls on classical musicians to quit