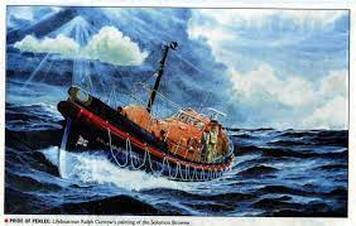 Into The Night – Penlee Lifeboat
Click here for tickets : £18.00  6 – 30 January
On Saturday 19 December 1981, the Penlee lifeboat ‘Solomon Browne’, was launched in hurricane conditions to go to the aid of the coaster ‘Union Star’ that had engine failure and was being swept towards the southern coast of Cornwall. It was an attempted rescue which ranks with the greatest in the history of the Royal National Lifeboat Institution.  Marking 40 years since the event, Into the Night has been adapted into a theatrical event by playwright and screen writer Frazer Flintham from the Cornish author Michael Sagar-Fenton’s book Penlee: The Loss of a Lifeboat. The author is himself a Penlee RNLI volunteer.

This performance of Into the Night remembers the courage, dedication and heroism of the Penlee lifeboat crew.
Author Frazer Flintham said: “It can be easy to forget that crew members on lifeboats in the UK are all volunteers. Electricians, teachers, builders – all willing to drop everything to go out into all weathers, and rescue people they’ve likely never met. I was drawn to this story for its humbling and very human reminder of what bravery can really mean.”

Director Alastair Whatley said: “The story of the Penlee Lifeboat is one of the most awe-inspiring stories of ordinary people being thrust into unimaginable conditions and risking everything to save others. It’s a story that touches all who hear it and our hope is to share this incredible story all over the world.”