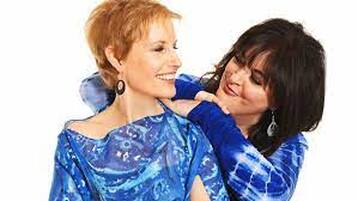 Here’s a great show which will only be available to those of us in Europe who are willing to stay up ‘til midnight to watch two favourite artists perform in New York.

The Tony Award-nominated Callaway Sisters are back by popular demand at Feinstein’s/54 Below with their new show Broadway the Calla-way. Liz Callaway and Ann Hampton Callaway will raise the roof with showstoppers by Leonard Bernstein, Stephen Sondheim, Jerry Herman, Rodgers and Hammerstein, Marvin Hamlisch, Stephen Schwartz, Kander & Ebb, and more.

Accompanied by their trio led by Alex Rybeck, as Ann’s sultry, jazz-flavoured sound compliments Liz’s clear bell tones, expect a rousing New York night of harmony, humour and the soaring sounds of the greatest songs of Broadway. If you can stay awake!

The cabaret room Feinstein’s/54 Below is making a big deal about starting a new livestream series to make their shows “accessible to fans across the globe”. So where do they think the globe is? These shows are to be presented exclusively on New York time, at the time of a live performance, and not available on demand afterwards, not even a 24-hour window. The show starts at midnight UK time so many of us will miss it. It’s maddening.

« Exclusive: How I helped Nureyev defect to the West

Just in: Grammys are scrapped due to Covid »