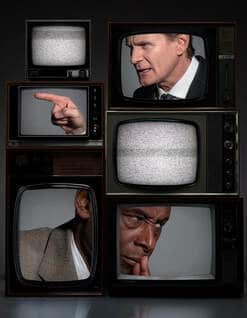 1968 – a year of protest that divided America. As two men fight to become the next President, all eyes are on the battle between two others. In a new television format, the conservative William F Buckley Jr. and liberal Gore Vidal feud nightly, debating the moral landscape of a shattered nation. Little do they know they’re about to open up a new frontier in American politics, and transform television news forever.

James Graham’s new play draws parallels between the bad-tempered 1968 debates between William F. Buckley and Gore Vidal and the rancorous public arena of today. Their bad-tempered exchanges took place against the background of the riots and protests that were rending America at the time. My colleague Matt Wolf, New York Times theatre critic, calls it “the most riveting play in London..” It stars David Harewood as Buckley, founder of The National Review and a conservative grandee, and Charles Edwards as Vidal, the writer and novelist with contempt for Buckley’s “Christian values”.

The Young Vic’s streaming innovation, Best Seat in Your House, is an immersive multi-camera player, designed with flexibility in mind. It is designed to place us, the audience, at the heart of the action, with each show feeling like a new experience. This is an innovative next step in live theatre streaming.