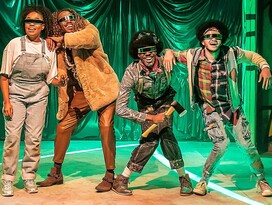 The Wiz, a retelling of L. Frank Baum’s beloved children’s story, The Wizard of Oz, through an African-American prism, was a huge Broadway hit in 1975 when it won 7 Tony Awards. The music and lyrics are by Charlie Smalls and the book is by William F. Brown. It continues to be revived in theatres all over the world and now it’s been produced in one of England’s most successful and reputable fringe venues, Manchester’s Hope Mill Theatre, which won Fringe Venue of The Year at The Stage awards in 2018.

The theatre had to cancel 15 sold-out performances over Christmas due to Covid and, as a result, the rights holders have agreed to it being filmed and streamed for a strictly limited number of performances to UK-only audiences.

Music is universal, nothing to do with gender »