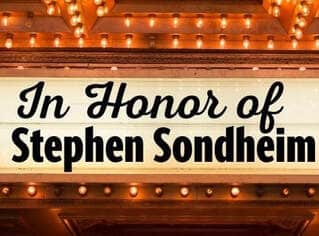 The Signature Theatre in Arlington, Virginia, has long made a specialty of performances of the works of Stephen Sondheim. The previous Artistic Director, Eric Schaeffer, was a lifelong champion of Sondheim’s musicals and directed many of them for the Washington DC/Virginia/Maryland audience. Last week, members of those audiences gathered for an hour-long tribute concert, to hear 16 artists who appeared in Signature’s past productions of Sondheim’s musicals sing some of their personal favourite songs, on the company’s main stage, the MAX.

There have been many tribute concerts in the past few weeks since Sondheim’s death, with many better-known singers, but none more heartfelt nor more familiar with his music than this one. Over the years, legions of actors, including these, honed their technique and depth of musical-theatre knowledge singing in Signature’s Sondheim shows.​
Fortunately for us, the Signature made special arrangements for this tribute concert to be filmed in hopes of sharing the show with a wider audience at a later time. Here it is.

Another young male conductor gets signed »