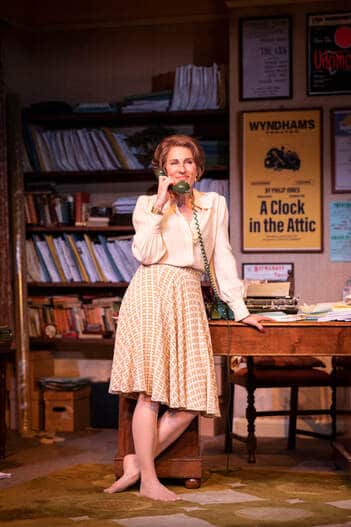 Peggy For You at Hampstead Theatre

Peggy For You at Hampstead Theatre

Margaret Ramsay, always known as Peggy, died in 1991. She was Britain’s most celebrated playwrights’ agent for more than thirty years and a truly original character – intimidating, contradictory, irritating and inspiring. Alan Plater’s Peggy for You gives a witty account of an imaginary day in the life of Ramsay at her prime.

As it happens, in this incestuous show business world, I knew both Peggy Ramsay and Alan Plater, not well, but well enough to know that Tamsin Greig is giving a dazzling performance as Peggy in Plater’s terrific play.
Maureen Lipman was the originator of the role in 1999 and I thought then that she couldn’t be bettered. I was right. Greig is giving a different slant to one of the most revered and difficult women in show business, equally observed, not better, but equally brilliant in illuminating the characteristics of this rather lonely woman who raised most of the greatest playwrights of our time from obscurity.

She was an overwhelming presence, feared and admired, but a unique personality who understood plays as no other agent ever had. If you were a playwright, established or neophyte, you dreamed of being represented by Peggy Ramsay, and her client list included Ionesco, Joe Orton, Robert Bolt, David Mercer, Iris Murdoch, John Mortimer, James Saunders, Peter Nichols, Charles Wood, Ann Jellicoe, Edward Bond, Christopher Hampton, David Hare, Alan Ayckbourn, Caryl Churchill, Howard Brenton, Willy Russell and Alan Plater himself.

She treated them all alike, with apparently even-handed indifference, with endearments, with a school-matron-like iron fist, and with no tolerance at all for skiving or excuses. At the beginning of the play, she has just spent all night getting a client out of jail. They were naughty children but they were her naughty children.
​
As we left the theatre, a friend asked me if I thought Peggy adored playwrights. No, I said, she adored plays.

« Memoir 1: How I overcame a miserable violin teacher

Why Vienna desperately needs a change of baton »