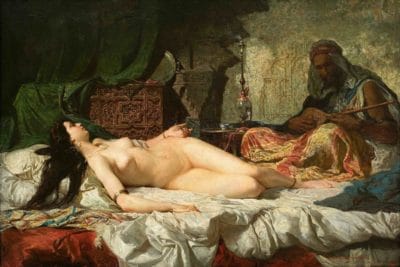 The picture hangs in the national art museum of Catalonia.

It is being used by the Centro Studi Opera Omnia Luigi Boccherini of Lucca, in Italy, in order to drum up academic interest in a forthcoming conference on musical exoticism in the long 19th century. Now where did I put that tanbur?

The Centro Studi Opera Omnia Luigi Boccherini of Lucca, the Research Group ERASMUSH of the University of Oviedo (Spain) and the Palazzetto Bru Zane – Centre de musique romantique française of Venice are pleased to promote the symposium «Musical Exoticism in the Long Nineteenth-Century (1789-1918)», to be held from Thursday 12 until Saturday 14 May 2022.

The sound image of the otherness has been a continuous source of inspiration for Western music. The interest in ethnic – Arabs, Moors, Gypsies or Jews – and geographical otherness – Turkey, Egypt, Orient or Spain – discovered new worlds with unfamiliar musical traditions that became exotic to Westerners. From Mozart to Falla, the composers’ intent to recreate/assimilate these exotic traditions generated an extensive repertoire of paradigms in the long nineteenth century that tried to conduct the listener beyond into another world. The analysis of this corpus also provides a deep and comprehensive approach to contemporary musical culture in dialogue with literature and figurative arts.

This conference explores the concept of musical exoticism in a broader sense, revisiting the two Locke’s patterns: the ‘Exotic-Style Only’ and ‘All the Music in Full Context’ paradigms, also considering the analysis not only of the musical creation’s cultural and political contexts but also of the various exotic repertoires and their critical reception.

The programme committee encourages submissions within the following areas, although other topics are welcome:

« Learn how to tango in four tricksy minutes