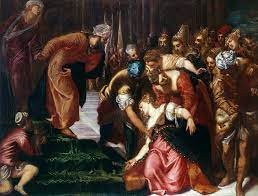 Hampstead Garden Opera is putting on the UK premiere of the 1774 oratorio The Salvation of Israel by the Hands of Esther, sung in Biblical Hebrew.

HGO says: ‘Ester is a unique work – the first Hebrew oratorio. With a libretto based on Handel’s Esther it was commissioned by the Sephardi Jewish congregations of London and Amsterdam from the Italian (Christian) composer Cristiano Lidarti. The charming musical style is early classical, showing the influences both of Joseph Haydn and of Lidarti’s Italian predecessor, Pergolesi. The manuscript was lost for over 200 years before it turned up in Cambridge University Library. ‘

Andrew Griffiths will conduct the HGOAntiqua Orchestra of period instruments and the Londinium choir, with HGO soloists.