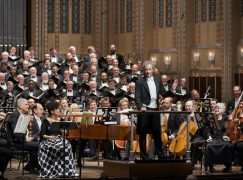 In view of the rapidly increasing omicron infection rate, the Bavarian Radio has decided to suspend the concerts of the symphony orchestra, choir and Munich Radio Orchestra up to and including Wednesday, February 16th.

The musica viva concert with Johannes Kalitzke (28 January), the concerts of the symphony orchestra with Constantinos Carydis (3/4 February) and Franz Welser-Möst (10/11/12 February), the Mahler project of the BR Choir with the Musicbanda Franui (February 12), already planned for the past season, as well as the Sunday concert “The miserly knight” (January 30) and the education concerts “Amazing classical music”. Due to the cancellation, the planned live broadcasts on BR-KLASSIK, both on radio and video stream, are also cancelled….

Bayerischer Rundfunk asks for your understanding for this decision, which was not easy for those involved. In all considerations, the priority for BR is to protect the health of its ensemble members, as well as the technical staff who are involved in concert productions and broadcasts, but also play an essential role in BR’s current reporting. This decision is primarily about ensuring BR’s ability to broadcast.

UPDATE: Bavarian State Opera will increase capacity to 50% from this weekend.

« Watch: Kaufmann and Terfel beg people to come to Grimes